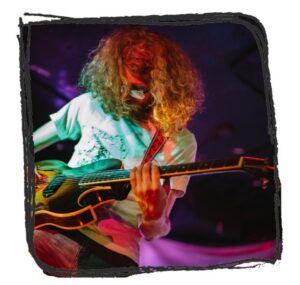 If you’re looking for a good starting point into the Chicago music scene, Dan Jarvis’ bands and music involvements are a great start. Dan has been involved with Midwest Action, a Chicago based label and music publication that has promoted acts like Ester, Superknova, and Impulsive Hearts. He works with Smashed Plastic, pressing your favorite vinyls. Finally, he plays with three active Chicago bands: Diagonal, Brbra Bush, and Bev Rage and the Drinks. Brbra Bush are an experimental funk band, Bev Rage are “loud, fast, and brash queer garage-pop band,” and Diagonal are a “pretty rad psych/jam/shoegaze styled rock.” Diagonal recently released a new album, that you should definitely checkout.

Read below to find out more about how Dan became involved with local music, what he has missed about live music, and how shows could change (like starting earlier),

What are some influences for Diagonal?

The nice thing about being a 6-piece band is that we all bring a lot of different influences to the table. We definitely have a collective love for the ‘60s psych and garage scene, but at the same time we like a lot of ‘70s Krautrock like Can and Neu!. The name of the band actually comes from a Stereolab song and they’ve always been a huge influence on me personally even if it only come through in subtle ways. I’d say we’re kind of a melting pot of ’60s, ‘70s, and ‘80s vibes.

It’s kind of like being in one band but three times the hassle. But seriously, it’s pretty damn fun most of the time. Diagonal has been my “main squeeze” for a while now and it’s the project I pour most of my time and creative energy into. Bev Rage and The Drinks is an incredibly fun band to be a part of and while I’m not the primary songwriting in that group I like the challenge of coming up with fun guitar parts that serve the song without overdoing it. It lets me stretch my punk muscles a little more. BrBra Bush is where I get to let my love of funk come out, I’ve played a lot of different instruments in that band but no matter what I’m playing that day, I know it’s always going to be a party. I think every band feeds a little part of my musical needs and keeps things feeling fresh for me. Kind of like eating a balanced diet of punk, psych, and funk.

Being in three bands, How do you schedule when shows are a thing?

This can be tough but a little organization goes a long way. Keeping a band calendar definitely helps. Back when all three bands were actively practicing it just happened to work out that different days of the week worked best for everyone so there wasn’t any conflict for me there. Tuesdays are for Bev, Wednesdays I’ve got Diagonal jams and Thursday nights were reserved for BrBra Bush. There was a fest back in 2019 where I actually ended up playing 4 sets in one day, all of my usual bands played and at the time I was also playing bass with Baby Money & The Down Payments. That was such a fun and exhausting time!

What’s the first DIY show you remember going to?

In Chicago, it was probably a show at Young Camelot or maybe Wally’s World. All of those shows are kind of a blur—the DIY scene was pretty huge back then. There were lots of different spots to see shows on any given night. I just remember cramming into hot tiny rooms to see local bands play but every once in a while you’d catch an out of town band that would just blow you away. I miss them sometimes, but I also like the comfort of a “real venue”. Swimsuit Addition was always a band I loved seeing in small DIY venues back in the day and now their bassist Sam and I get to play in Bev Rage together!

The first band I was in that actually lasted long enough to play some shows was a shitty little punk band named Bad Applesauce. “Shitty Punk” was really more of the genre we played and less of a descriptor of the band. I played bass, we were a 5-piece and mostly wrote songs about drinking that our friends could drink to. It was fun, I was in school at Columbia College at the time getting my degree in photography so it was easy to just walk to a dank bar after class, bass guitar on my back, and play 17 minutes worth of punk music. We played the Mutiny in Logan Square a bunch, they’re closed now but it’ll always be Chicago’s most legendary self-proclaimed “dive bar”. I think our MySpace page got wiped clean when their servers go erased a few years ago. Maybe some archival record label will unearth our demos and put out a deluxe vinyl collection one day.

What are you most looking forward to about shows returning?

I didn’t think I’d miss hanging out in dimly lit bars so much but whenever I see one on TV I get a little sad. I’m looking forward to seeing a lot of friends again. Over the years of touring and playing local shows we’ve met so many bands that have become good buds of ours and I miss seeing their faces. There are always some exceptions, but most bands I’ve had the pleasure of playing with have had a great sense of camaraderie and were always willing to help out an out of town act. I miss that a lot, and ya know, just being on a stage again would be real fun.

I’m definitely not the first to suggest it but I’ll always echo the idea of starting shows a bit earlier. I’m in my mid-30s now and I don’t really want to hit the stage at 1am on a Thursday night anymore. I’d also love to see venues compensating bands appropriately but that’s nothing new. I think free shows are often a great way to get people in the door and a lot of times we end up making more money off of a bar split than a door split, so I wouldn’t mind more venues adopting that practice.