“The pandemic hit, everyone went into quarantine, no one had a place to play music, or a reason to play music. It was a very depressing time.” This is what led Tara Shedor (and Rory) to start the Internet Cafe Open Mic. She saw this as being “a nice intermediate solution” while live music was no longer a safe option. This instagram open mic occurs every other Wednesday, and offers a stage to diverse and unique acts. Chicago folks like Wet Wallet and Sam Larson perform alongside folks from around the country, and sometimes from abroad. Over 100 different acts performed during 2020.

This two hour event gives folks an opportunity to hear new music, interact with other people, and to be a part of a growing music community while we are all ready to see, hear, and smell all the wonders of live music. This virtual opportunity feels like its own thing. The viewer could be anywhere, they could be sipping spiced wine or riding an exercise bike. The limits of location, space, and accessibility are open, making this a special online event.

Please read on for some interview blips.

Brad – Was there a steady buildup for the open mic, how has it grown?

Tara – It has not been linear. There have been 40 people tuned in at a time, and then nights where there’s 6-10 people. It took four months to get to the point of having at least 20 people on at a time. I think the most cool thing about it is that there has begun to be a unique scene around it. A Lot of the same performers come back and tune in. It has created a cool little community of its own. These performers who have never met each other or had a reason to be in a room together, suddenly in the same room together, on the internet, commenting on each other’s art.

Tim – Yah, I have found new music from the open mic, like Sweetie, I heard them, then checked them out.

Tara- Then you check out their recording, then you’re in their music network.

Tim – Have you had any favorite performances through this experience?

Tara – One of my all time favorite Chicago performers just performed, a month ago. Wet Wallet! I remember the first time I saw Wet Wallet, they were at the Slippery Slope, and I had gone upstairs with friends to the Heavy Feather, then somebody came up and told me “Tara you have to go see this band, like lets go right now.” So I downed the rest of my drink, went down the steps and Wet Wallet was on the stage. I was so overwhelmed with joy, their performance was so full of energy 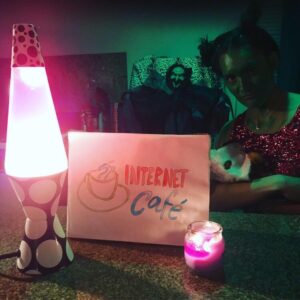 Brad – What have you learned about community and building relationships during this time?

Tara – Yah know, I feel like this is something I did intuitively earlier on. Actually, in my earlier community college days… Actually this is why I started playing rock n roll music! In my freshman year, I was involved with social justice clubs. And my friends asked if my club would team up to do a battle of the bands. I played guitar at the time and was like, yeah I could put a band together with a few friends, then I did this event and got on stage, and thought I have to keep doing this.

So why does putting an open stage in a community connect people? That’s because people are able to recognize and be their truest, most full present selves in these performance opportunities. If these opportunities don’t exist, people don’t have that ability to reach their fullest potential. So you have to set a stage in the community for people to represent themselves.

Brad – From my experience, I grew up in the south suburbs of Detroit, I would play music in the basement with my friends, but there was one place with an open mic, and it was surprising the amount of teens and 20’s who would come out and play. I know this was important in my life.

Tara – Yeah, there was an older person on the open mic who just picked up a guitar, and is now getting in front of people to play. Sometimes your life can change by just trying something new, and having a place to do it.

Tim – How have you gotten so many performers on the open mic?

Tara – I really enjoy going on Instagram and clicking around for strangers and people I already know who might want to perform. I just look around for who is holding a guitar, or something that will make them look like they play music or do some kind of performance. This is an interesting part of this, the instagram algorithm has shaped this community. For example, I already had a small network of friends in Austin who I had asked to perform, and from them joining, and now I have more performers who find the page from the traction of me already having those people play. This also happened with an area of California, now I have a blip of their music community.

Tim – Have you considered having a soft animal friend themed open mic?

Tara – Where everyone brings their animal pal along? Rory seems to like that idea

Tara – I have been thinking a lot about a quote that I read recently, but I can’t remember exactly what the quote is, but it’s like “Your capacity to create is useless unless you create. Never don’t do something because you can’t do it perfectly. If you can’t do it to your perfect standards, because if you’re not doing it, you’re not doing anything at all.”