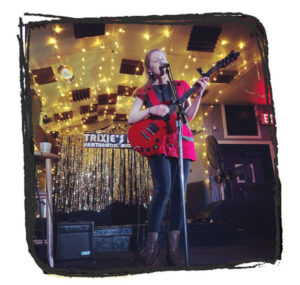 My stage name is Ashlee Alpha Shrimp, and with the same contradiction of my powerful stage name, I must confess that even though I have been performing for years, I have had stage fright since I was five years old. I can remember the first time of fully realizing my stage fright when I was in kindergarten. I was asked to say the Pledge of Allegiance on stage at a Board of Education meeting. I remember so vividly the intense emotions of being terrified while standing on that stage, even while being with a group of four other kids, and even though every adult in the room was standing and saying the pledge along with me. As a young alpha shrimp, I can still feel the loud pounding of my heart in my chest, my sweat glands perspiring as though I had just run a marathon, and my entire body feeling as tense as a deer in headlights.

In middle school, it was my presentation of Zeus in English class, and in high school, it was my presentation of Diego Rivera in Spanish class (and maybe a little bit of the cute guy, Billy, sitting in the front row). Each public speaking event has fueled my nervous system into overdrive. It has always resulted in my face turning as red as an apple and a handful of sweat-drenched paper towels after running to the bathroom in pure embarrassment.

In college, I shared with a friend that I had written a few of my own songs. He nonchalantly asked if I wanted to open for his band at a show he was playing in a few weeks. I was surprised by my own answer of immediately agreeing and saying yes. I had only been learning guitar for a few months before that by teaching myself the bare necessities of playing and strumming. I probably knew five chords at most, and the only songs I knew were the five that I had written myself: the perfect amount for an opening acoustic set.

When I arrived at the venue called Louie’s Bar in Kalamazoo, I could feel the same terrifying reaction my body was used to as I prepared myself to take the stage: tense muscles, excessive sweat, and my overpoweringly pounding heartbeat.

“Do you want to sit or stand?”

Decisions and questions I did not know how to respond to at the time as a fresh musician using my mom’s old acoustic guitar from the 70’s that I had found in my basement. I knew I had to sit because my knees were shaking, and my guitar did not have a plug in, so it needed to be mic-ed.

I sang every song I knew how to play, all of my own creations, the only content I had at the time: starting with Eric was an Anarchist and ending with My Bike Song. I stared at the floor the whole time and I am pretty sure my voice was somewhere between a mumble and a whisper. Despite the audience being about 10 people at most, and 3 of them being people I knew: my friend, Tim, and two of my sisters, I still felt so frightened being up there. At the same time, somewhere in my pounding chest, I could feel the elation of sharing the music that I had poured so much loving intention and energy into.

Had my friend, Tim, not asked me to play that night, I might have put the guitar down and thought nothing more of my song writing, or kept writing in my dorm room in secret. But taking to the stage that night gave me a sense of purpose and ownership of my song writing. It gave me a new kind of awareness to put into my stage presence. It gave me a belief in the potential of what I was doing creatively and a spark of confidence in becoming open to share it with the world. It took countless other small steps to fully grow into the relationship I have with the stage now: an opportunity. It is an opportunity for my spirit to be fully opened and connected to a special kind of energy that is like no other that comes from vulnerably singing and performing original melodies. It is an opportunity to create a community of compassion, harmony, and oneness between myself and every human listening. Now I love performing; I take to the stage with delight and butterfly nerves of excitement. I am grateful for Tim’s belief in my music before I even knew what I was doing myself. There is a profound power in giving someone the gift of belief serving as a catalyst into the guiding light that one is meant to be going towards in life.