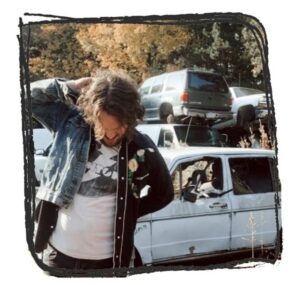 Jake Simmons from Kalamazoo chatted with Brad and Tim (YouTube video below). Jakes Simmons and the Little Ghosts have been playing foot stomping rock and roll throughout Michigan and the midwest for over ten years. Jake’s songs hit that special point between throwback heartland rock and more modern punkish rockers like Ted Leo or The Hold Steady. No Better from 2016 is a highlight of Jake’s work, ten songs fly by and perfectly capture the life of being 20-30 something in Kalamazoo bars and basements. Lot’s of us still love some good olde rock n roll, but might find it hard to find anything that sounds unique, fresh, honest. Jake Simmons and the Little Ghosts are doing it, especially with the new song, My American Dream.

“It’s going to cost me a debt to breathe, hey that’s my American Dream.”

Tim – Have you been working on any music things?

Jake – Over the summer I recorded a solo ep. With full instrumentation by myself. I haven’t done that since ten years ago. It’s the first time I’ve done it since then. I’m a much better musician now, it feels good. And today, I was working on a cover.

Tim – Can you say what the cover is?

Jake – It should surprise no one that it is a Bruce Springsteen song.

Brad – What drew you to Kalamazoo, what was your experience like when you came to Kalamazoo?

Jake – I lived in South Haven, graduated in 2006, moved to Kalamazoo in 2008. My friends moved up here, that turned to band practice, and everything else, it seemed like the logical next step?

Tim – Did you start going to shows in Kalamazoo before moving there?

Jake – When I was in High School, or fresh out, we got to play a couple shows at Kraftbrau, I was not old enough to drink, but the root beer was phenomenal… I went to some shows at Rocket (Something) and being from a smaller town, I hadn’t been to shows like that. It blew my mind that people would show up and enjoy themselves to that degree. I was excited to get up here and be a part of it.

Tim – When you moved to Kalamazoo were there any bands that you were a big fan of?

Jake – When I moved here, I was in a band called Dead Scene Radio, and we played a lot with Their Teeth Will Lions.

Tim – Their Teeth Will Be Lions played Weiner Fest

Jake – That would have been 2015. There were a handful of lineups for the band, the one that played Weiner Fest, it was a lineup that had never played before.

Brad – So on your latest song, American Dream. What was the process of writing this song?

Jake – That was recorded with the new e.p. songs. A couple I had sitting around, that one is obviously topical, but that’s the style of the songs I recorded. Up until the pandemic I had some writing block…. But after being forced home for so long, you can’t book shows or be productive in a meaningful way, so I wrote a ton of songs. I felt inspired to get this stuff together.

Tim – When you’re on tour, are there things you tend to do in cities?

Jake – Usually we pick one kind food that we want to find the best-of on that tour, and we will just shoot for that. We will go to guitar stores, record stores. Usually, I make it a point to book the shows far enough apart so that you only have enough time to get to the venue, play, find somewhere to sleep, do it again the next day?

Tim – Is there a reason you book that way.

Jake – Now, it;s just the way I’ve been doing it for so long. At first, it seemed like if you’re covering more ground, you’re doing more. But that’s not true.

Check out Jake’s new song My American Dream, along with his other band, Katy Needs a Life.