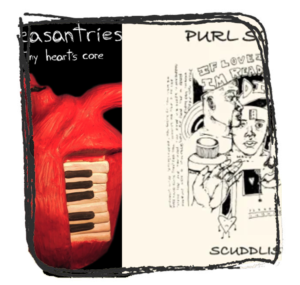 By: Sam Glaser and Meka Ohno

Connections between fanboys are often ephemeral, or fleeting. Job gets busy, responsibilities at home flare up when that backyard show was scheduled… But this is not one of those stories. What you’re about to read is the result of two music consumers with voracious appetites, sporting a hefty level of respect for each other’s perspectives and curative impulses. Indulge yourself; take a dip in the waters of collaborative admiration.

We present to you LETRAS, a newly established dual writer column that will focus on two artists or groups a month, bringing to you the art we enjoy. Though their names may start with the same letter, together we strive to bring diversity in presentation and genre amidst an alphabetical coincidence.

The sophomore release from Pleasantries (@pleasantriestheband on IG) is a wonderfully cohesive collection of tunes, truly crafted as an album instead of the oft-embraced format of SINGLE>FILLER>>FILLER>SINGLE. I’m sure you know the drill. Entering on a serene breeze of strings, Tiny Heart’s Core will reach out to sonically embrace you. Is that cool?

Though Pleasantries exists as a trio, their studio time is clearly where they arrange and layer, truly filling a room with their pomp and groove. Doff your cap when an expert enters the room, everyone. Tiny Heart’s Core is a testament to their playing prowess and mixing wizardry, sidestepping the pitfalls and tripwires inherent in lush soundscapes. You can positively hear the care expended in post as instruments loftily avoid run-ins with their harmonic neighbors, ringing cleanly in hi-fi.

I was amazed to learn that the album was recorded mostly sans metronome, which truly makes Pleasantries a band after my own heart. They knowingly chose to forgo this industry standard, stating frontman Andrew: “…it sounds so much more alive than recording to a grid… the imperfections in the tempo make you feel like you’re hearing a real performance rather than a more perfected, more sterile sort of rendition.” I couldn’t agree more, and now task the haters to find issues with the completed art. Fans of The Beach Boys’ more artistic arc may be able to sense traces of the inimitable Brian Wilson, and his penchant for walls of sound.

Backed by woodwind performances from Isaiah Sanderson (So Jam Much Chill), songs borne from Andrew’s internal symphony blossom into aural heartbreakers, making no attempt to hide their (sometimes) soul-rending origins. Claymation music videos from the frontman himself accompany the audio, lending a surrealist edge to the project. A perfect accompaniment, Andrew’s homemade visuals solidify the album into an irrefutably solid body of work, transcending the mere label of “album” and creating an immersive experience for its audience. Tiny Heart’s Core is available to stream on all platforms; visit the band’s YouTube page and its gory clay contents if you’ve got the constitution.

In modern music, fan service is running rampant. We, the listener have been so conditioned to listening to rappers randomly talking about guns or how they can pull your girl in their designer clothes. it’s become cliche. On the other side you have conscious rappers that are the musical equivalent of a missionary coming to your house uninvited and going on a rant about how alcohol, drugs, and general revelry are sins that should be prohibited. Purl Scudd is a refreshing change to the status quo.

Purl Scudd, 26, was born in the Ickies (and spent time in the Marshall Gardens), but has lived all over Chicago. He brings that need to constantly evolve and survive to each song he spits. Going through his soundcloud means witnessing his progression, far succeeding prior ventures with every new project. Purl Scudd’s songs are extremely personal and tell a story to a new age flow that keeps the listener engaged. From being homeless to robbery as a means of survival,, relationship problems to even the lack of mental health in poverty stricken neighborhoods he assures his “accidental” depth provides an extremely relatable experience that truly grabs the listener.. The bars are way to personal to come of as pandering for fans. Theres plenty of pop culture references from the likes of Spongbob in “I’m Ready” to embedded political references like “Head shot now that boy look like a Kennedy”.

While Covid-19 is robbing us of the smooth high energy performances that we deserve to see, Purl Scudd stays in the studio and has new music dropping via both his Soundcloud and his Youtube channel.

By: Sam Glaser and Meka Ohno