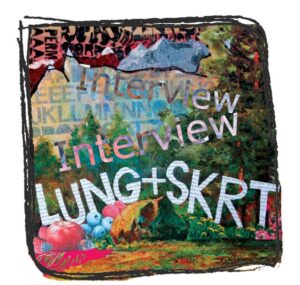 “We like each other as people, we like each other as bands”
It’s hard to write about Lung with any air of objectivity. Their music is a delightful blend of punk, metal, and rock that is swirled up and delivered with cello, operatic vocals, and steady drums. On top of their music, they are a couple of wonderful people to share a cup of tea, beer, or a zoom call with. So, while I was excited to hear new music and chat with Lung, I was equally excited to hear music from SKRT. I had never heard of, or met, this Dayton band, and I can’t wait to someday see them at Blind Bob’s in Dayton.
Until then, we might have to settle for music in bubbles or spacesuits, or even a “bubble of the bands.” This conversation includes Lung (Kate, Daisy), SKRT (Asche, Abbie, Micah), and Middle Music (Brad, Tim). Some excerpts are included below, but watch the youtube video to catch all the scoops about recording, midwest music community, Deerhoof, Amanda Palmer, and edible records.

Tim – SKRT, have y’all played around the midwest much
Abbie – We’ve played in Cincinnati, and Ohio, and a little Kentucky, we’re just like a homebody band, we’re looking to change that here and there. We like to say that we’re our local bar’s house band.
Tim – What bar is that?
Abbie – Blind Bobs, in the Oregon District in Dayton, it’s the spot for all the good shows
Daisy – It’s one of the best best rock and roll bars in the world
Asche – It’s been a spot for punk, rock and roll, everything in between, your local dive that you don’t smoke in.
Tim – Gosh, I don’t think I’ve ever played in Dayton, or known venues to email, or any Dayton bands.
Daisy – That’s amazing! I would rate Dayton as the best city in Ohio to play music in.

Brad – So Lung, you’re from Cincinnati, and SKRT from Dayton, I was curious, how does the community work in southern Ohio? There are a lot of neighboring states. What is that ecosystem like?
Daisy – You can drive any direction for two hours, and hit another city. Some of those cities there are cool bands and people. That makes traveling and playing music a little easier. You don’t have to drive 6 hours. We meet awesome people like SKRT, and we make records with them.
Abbie – I think we got close playing each other’s Ladyfest.
Kate – Yah!
Abbie – We each were involved in our respective city’s ladyfests. It’s celebrating women in music in our area, we bring in all the cool punks and artists, we would leach off each other, and build a great tri-state area collection of female centric artists. In doing this, we were in a leadership role for the whole thing, and have the same stresses. We got really close, quick. While doing this, we met alot of people from all over. We got to watch them grow from the start.
Daisy – The Dayton Ladyfest might be the longest running in Ohio, Paige Beller does an amazing job.

Tim – How did the idea of a split come up, and actually happen?
Daisy – The idea had been there to do something, because we like each other as people, we like each other as bands. We were on tour in Prague, and Abbie texted me, as was like “How would you feel about doing a full split record?” And we thought, actually that is kind of cool, Abbie sent us the songs, and we love SKRT, we had some songs left over from recording, songs we liked. They complimented each other. They fit together, and that’s rare. I feel like it’s a lost art, putting together collaborative a record like this.
…..
Kate – We should all get vaccinated and wear spacesuits
…..
Tim – I saw Blues Traveller once, they played Creep by Radiohead
Abbie – Did it have harmonica in it?
Tim – Yes, lots
Abbie – Why does that make it sadder?
Micah -I don’t think you can sound sad with a harmonica
Brad – There was a coffee shop by where I grew up where you’d see friends chain smoking outside, all singing along to Creep being played with a ukulele.
…..
Brad – What did you learn from this process of doing a split together?
Micah – We initially thought of recording two or three songs, and doing a 7inch split, but we didn’t want to separate the 6 songs we recorded, we liked the way they flowed together.
Daisy – The idea challenged us to put stuff together in a way that complimented how the SKRT songs flow together, our side has songs that we play live that are more aggressive, that didn’t fit on the record we were working on. We probably would not have put them together in that way, it was a challenge creatively.
…..
Tim – SKRT, are there any main music influences for y’all?
Asche – I can’t speak for everyone else, but for me, it depends on what I’ve been listening to that month, a bunch of riot grrrl stuff, 90’s alternative, Slint, grunge, those feel good cadences from the 90’s. Edith Piaf, Judie Garland, a little bit of that sprinkled in there, vocally wise. As a band, what is something we come together on?
Micah and Abbie – Deerhoof
Micah – We don’t sound like them, just a band that we like.
Abbie – We are always subconsciously thinking of Deerhoof, whether we are making a sandwich or writing a song, Deerhoof is in it. We don’t sound like them.
Kate – They have this out there weird awesomeness, some of the crazy is similar.
Daisy – You don’t sound like them, but it makes sense you like them. You don’t hear a band and think they sound like Deerhoof, no one sounds like Deerhoof.
Tim – It’s the spirit of Deerhoof. They were one of the first obscure or indie bands I listened to, the Michigan City Library had their album in 2003.
Brad – Tim went into that library and all he listened to was John Cougar Mellencamp…
….
Tim – Kate, are there any songwriters who influence you?
Kate – I love Suzanne Vega, Schostakovich, I think if he was alive today, he would be in a lot of different weird bands. He has these dark weird symphothies, The Dresden Dolls…
Asche – Ahhhhhh!
Kate — The song, Girl Anachronism that was my anthem growing up as a kid in Michigan.
Asche – I knew it
Kate – It is so good, it’s a perfect song. The lyrics are amazing, sounds like she is spinning off the planet
Asche – I listened to that album a whole bunch last year, I can’t get enough Amanda Palmer. She’s so good, you’re so good!
Kate – The Jeep song is so good, how sad is that song?
Asche – That’s probably my favorite
Daisy – I have too many Dresden Dolls opinions
Kate – This one we may not agree on it
Daisy – So, Guns n Roses, the first record is great, after that it gets weird, that’s all I’m saying.
…..
Kate – We’re just really excited about this release with SKRT. Even though the world has been shut down musically, we’re excited to be releasing these songs. And the tasty vinyl from Romanus Records. It’s edible, you can take it and eat it, like a fruit rollup.
Tim – How many times should you listen to it, before eating?
Daisy — The optimal amount of times to listen is 7, then eat it.
Micah – Just until you get hungry.
Kate – Listen to it until you get sick of it, then eat it.
Tim – Wonder what they would make edible records out of?
Asche – It’s made of gummy, I hate gummies, but…
Kate – You hate gummies?!

Listen to Lung
Listen to SKRT