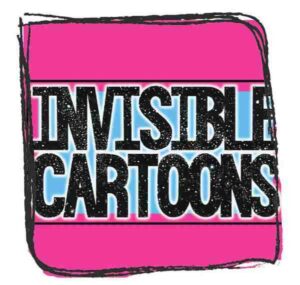 Invisible Cartoons have been performing their eclectic “smile rock” tunes around the midwest for eight years. This Chicago area quintet combines their diverse tastes in soul, metal, indie rock, and funk to create a unique and uplifting sound that all began with an opportunity to make a a song for Coca-Cola. Enjoy some excerpts from a conversation with their vocalist Chris Schern, along with Brad and Tim. Full video below.

Chris: The origin of Invisible Cartoons started in 2012. One day I had an opportunity to do a song for a Coca-Cola commercial… So we wrote the song, the first song we wrote, which is on our first album. It was campy and fun, we didn’t get the Coca-Cola ad, but we wrote a song together. Then we were like, let’s get some stuff together. It was more of a folky-pop vibe… What you hear now is smile rock, aggressiveness, fun, having a good time, uplifting.

Tim: Has it been intentional to be smile rock?

Chris: It pretty much came into its own. Justin is in a band, Fates of Winter, they’re more folk-rock-alternative, it’s kind of sad music, more serious. I was in a band,called Stuck Under Water, a metal band, and I played Trumpet in that band… So I did that for 11 years. We were in these different sorts of bands, but we wanted to do something more catchy, uplifting, positive, with the vibe that we did for the Coca-Cola ad. I think it made sense doing what we did, to what we were going to do. The whole smile rock thing just came to me, when it came. We definitely have more edge for the new stuff.

Tim: Does the audience response feel different with being intentionally happy and upbeat?

Chris: It’s pretty cool, cause it’s a lot more diverse. We don’t really know what our fanbase is. Our music has resonated with 6-60 year olds, well even my three year old likes our stuff. If it’s danceable, people are going to just do their thing.

Chris: If there’s 30 people in the room, and 12 people grooving, that’s who I gravitate too… You can play to 100 people, and maybe ten gave a shit, everyone else was watching the football game. I gravitate to people who have a passion for what we are doing.

Tim: It can be exhausting to bug your friends

Brad: You’re currently based in Chicago, is that correct?

Chris: We’re based in the Chicagoland area, we have some guys in the city, I live in Aurora, we don’t play in Chicago a lot. Chicago can be a little shoegazing… We go to them small ass towns, they aint got nothing to do. Lets watch this dude with these pink shoes dancing around for an hour. There’s too much shit going on in Chicago.

Tim: Do you all share similar musical inspirations or influences?

Chris: A lot of the music that I grew up on. I was a typical black kid from the westside of Chicago. I listened to Prince, Michael Jackson, RnB, soul, James Brown. Then in the 90’s I was listening to Korn, Deftones, Tool… This is my philosophy. I think if you’re a musician, you don’t listen to just one type of music:  I’m a sponge, I’m a thief, I steal from music. I listen to everything and I get inspired. My guitar player listens to a lot of indie music, folk. He’s a huge fan of Bright Eyes. I never knew who they were til he told me about them. And he never knew Prince. My keyboardist is a music nut, he likes all kinds of stuff. My bass player used to be in a punk/metal band, he’s such an awesome bass player, phenomenal player, and singer. My bass player and Keyboard player are in another band, Shady Play, it’s a cover band that does interpretations of songs in a swing and jazz way. Those guys are musicians. My drummer is very into heavy music. His drums are very bombastic !

Brad: What have you taken from playing heavier music into what you play now?

Chris: It’s funny, I use a  lot of those elements of my vocals into our music. If you see us live.. I used to do a lot of high pitched, like black metal *rahhhohhhl”. Then I use that same element, and I put a James Brown cadence to it. Instead I’m like “oweeee Yah!.” I also do some more crooner stuff with Invisible Cartoons, like more smooth stuff. I was playing metal for 16 years, and that’s never going away. It works, the cooll thing about this band is that we all sing, we have 5 guys, 5 mics. It’s a sound person’s nightmare.