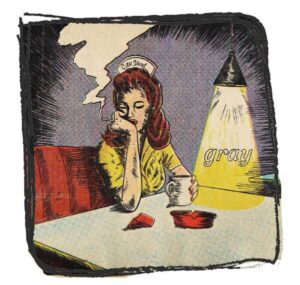 City Ghost is one of those bands that make me miss concerts more than most. Their energy is infectious, their sound is familiar yet new, and their angst is PALPABLE. Salt Lake City’s City Ghost just released a new 6-song EP called Gray and it perfectly captures mid-west indie/emo feelings while being something entirely new. “Forget About It” as an opener is perfect – it makes me want to drive down the main street of any town late at night and angry cry about my ex while air-drumming on the steering wheel. “Level with the Sea” delivers Pedro the Lion vibes with a sharp, nostalgic punch to the gut via the lyrics in the chorus – “I’m so far from home, we can still be kids even though we’ve grown. Tin cans turn to phones but the strings are never sewn.” Lead singer Sadie O’Neill’s voice holds so much emotion. It feels like it’s always on the verge of breaking into a scream or a sob but so specifically controlled and powerful – reminiscent of Hop Along’s Frances Quinlan. This album is emotional and fun – big guitars, delicate back-up vocals, and so many feelings. I love this band.