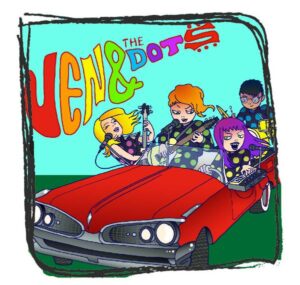 Chicago’s Jen & The Dots opens their self-titled debut with “Greta Garbo”, a song whose poppy hook ironically refers to the melancholic twentieth century actress, the music pulling you along on a mellow surfy journey reminiscent of 60s pre-punk and 80s alternative and indie like The Pixies and Throwing Muses.

The EP continues on with another hook-laden track, “We Took A Stab” which again ironically places a catchy, sweet hook against the lyrical content which hints at a feeling of defeat. The next tracks move at a similar pace, with “The Buzz” growing darker and more angsty, the vocals becoming less airy, more angry, and similarly more snarling guitar tones and group backup vocals. Jen’s voice starts to sound like it might if you were watching them rehearse in their garage, shaking dust loose, or at a basement show with the crusty PA system pushed to its edge.

Jen & The Dots’ release concludes with “Get You (Into The Groove)” which is even more a rocker, showcasing Jen’s more gritty side, vocally a contrast to the airy, secret-sharing speak-singing on the other tracks.  It ends with a final refrain and angry buzz from an overdriven amp, like a good rock show.

The group puts a premium on brevity, intensity, and catchy hooks, but aren’t afraid to delve subtly into the dreamy, hypnotic side of rock and punk, leaving the listener feeling like they just caught a set at some oceanside bar, lost somewhere in time.