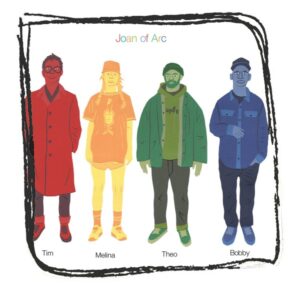 To say Tim Kensella is prolific would be a gross understatement. With Joan of Arc’s 24th studio record, Tim Melina Theo Bobby, hitting the airwaves it’s a wonder the innovator has anything else up his sleeve. Unsurprisingly he still does. This isn’t the masterpieces of the late 90’s and early 00’s, but it’s still solid indie/emo rock that shows Kinsella is more than deserving of his place at the table with the likes of his old bandmates Davey von Bohlen (The Promise Ring) and brother Mike (American Football). Combined with his solo work and the off the wall Good Fuck, with partner Jenny Pulse, his twenty-first century output is easily rivaling that of his early career.

As the only consistent member of Joan of Arc, Kinsella is the driving force but it’s clear that the other members play a hand in creating the material. Hence the album title listing their four names. Long time bassist Bobby Burg and drummer Theo Katsaounis don’t just provide a low end beat, but join the compositions as equal contributors. And guitarist/vocalist Melina Ausikaitis (joining Burg and Katsaounis in Aitis Band, who are a revelation live) has been a wonderful addition to the mix since she joined in 2012 and took lead vocal duties on 2018’s 1984, an assignment she splits with Kinsella on this effort.

The at times disjointed flow of Tim Melina Theo Bobby, can be excused through its format. Covering material written over the last three years, this is more a compendium of work that was put together when time was made away from other projects. After eight years of playing together, this iteration of Joan of Arc feels lived in. Like an old friend returning to your life, a little haggard, a bit rough at the edges, but still with the same rapport and care that has always been there.

They say this is their “final album.” While it may be the last of this iteration, it’s hard to believe that Kinsella will let Joan of Arc rest in peace. The others may move on to the stirring waves of post punk oblivion that is Aitis Band and Ausikaitis’ amazing motion synth guitar, but Tim will be back eventually. It would be difficult to imagine a world where Joan of Arc is gone for good.

Stand out tracks: “Karma Repair Kit” “The Dawn of Something” “Feedback 3 /4” and “Cover Letter Song”