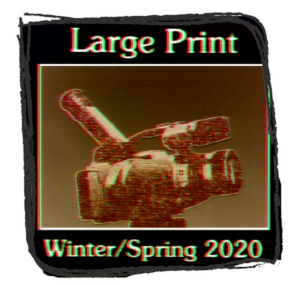 “Are you a heathen or do you believe in Jesus?” Milwaukee band Large Print’s latest LP, ‘Winter/Spring’, opens  with an immediate, probing question on “Gothika”. Boasting twenty-five songs, ‘Winter/Spring’ is compact with brief but emphatic tracks that bleed fluently into the next. The band’s intent was to write a song in one minute or less, recording to tape via a Tascam 388. The result is a collection of versatile, lo-fi songs that showcase the band’s songwriting fluidity. Large Print’s sound has the raw edges of an experimental Art-Rock band while having the playful congruency of an established contemporary Indie-Rock act.

There is an evident harmonious relationship between the five bandmates in Large Print. This is a band that showcases their chemistry and wears their jam sessions on their sleeves. Not only are they a busy band, cranking out tunes on a weekly basis, but they also release inventive music videos alongside their tracks that encompass the song’s environment. From glitchy animation clips and 90’s analogue aesthetic, the videos (created by the band’s own Eric Risser) allow mystery and intrigue into the band’s contextual process. While there is a generous amount of material from Large Print, they still uphold a level of brand ambiguity that can only be answered by listening to their dense catalogue.

The band’s front-woman, Grace Mitchell, provides a casual but purposeful vocal delivery to her observational and inquisitive lyrics. Her voice skates over the music in whatever direction she pleases. One foot may step into creative dissonance, however she is always grounded to the song. While there is a consistent change of instrumental focus in ‘Winter/Spring’, each track balances minimal instrumentation and lo-fi production creating a relaxed but deliberate tone from start to finish. Bass player, Jay Joslyn, dominates the front half of the record, creating authoritative ownership of the songs, allowing the vocals to coast without obstructing the lyrical repartees. Melodic bass and loose drums (Andy Grygiel) keep the songs buoyant while dynamic guitar leads flutter in and out, aiding melodies and adding their own sonic textures. The guitar presence, split between guitarists Eric Risser and James Brickner, gains momentum further down the track-list. On “Other World Music/Dead Frets” the guitar textures shine, creating tropical shade only to be interrupted with an abrupt rogue takeover of quacking, tonal tension by the same flowering instrument in the first half of the song. It’s in this unanticipated, daft moment, where Large Print showcases their ability to not take the music too seriously, but rather embrace the instantaneous moments of change. Other highlights on the record include a cover of “Love Hurts”, the classic ballad made famous by Nazareth’s 1975 rendition. Large Print’s stripped down cover refrains from the “cheese” that most popular covers can’t avoid. Its brief but fervent appearance sounds as if it belongs in a John Hughes movie, setting the scene of a High School Homecoming slow dance. “Horizontal” is possibly the most accessible track, exposing the melodic sophistication the band achieves while still upholding their unruly curiosity of 90’s Grunge and Alternative Rock akin to early Beck and The Dandy Warhols.

‘Winter/Spring’ is a diverse mix of grit and finesse, manifesting the necessity of eclecticism in music and band chemistry. It seems as though Large Print is an endless pit of musical ideas, and they’re not discouraged to hit ‘record’ and allow their ideas to come to full fruition. One thing is clear: Large Print has potential to make a series of wide-ranging music, a catalogue that won’t take up too much of your time and you’ll enjoy every (brief) minute of it. With Mitchells’s voice in the foreground, the distinction of their sound will always prevail; no band will ever sound exactly like Large Print.