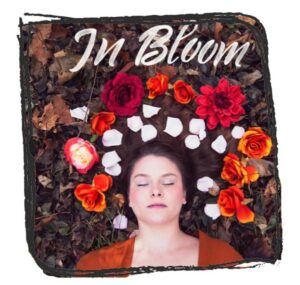 On April 22nd, during the peak of lockdown isolation and anxiety, multi-instrumentalist and singer-songwriter Lindsey Joy Ward unobtrusively released her debut EP In Bloom. It was a grey, dismal spring day, not yet furnished with the promise of summer greenery, nor was there any assurance of escaping the unfolding complications of a pandemic. However, somehow among the disarray of uncertainty and drear, Ms. Ward found a way to capture hopefulness, growth and awakening in a brief thirteen minute collection of songs on In Bloom.

Lindsey Ward began playing and excelling at violin at the early age of five, later branching out to a variance of instruments such as guitar, cello, piano, electric bass, and voice, eventually incorporating a looper pedal to layer her instruments and create a fuller sound that encompasses her songwriting visions. Her live performance is equivalent to the versatile talents of Tash Sultana, orchestrating a one-woman show all while offering an incredible, engaging voice on top of it all. On the record, Ward’s songwriting offers the inquisitive, playfulness of Andrew Bird, both implementing classical music into otherwise unfamiliar territory. While it’s tempting to gawk at her wondrous talents, it is far more enlightening to examine her ability to use these hard-earned practices and turn them into bewitching songs that invite her listener into her colorful, tranquil, mystifying world.

The opening title track “In Bloom” is a momentary instrumental prelude that sets the stage for Ward’s blossoming sound, beginning and ending with the delicate plucking of violin strings, reminiscent of spring flowers poking their heads through wet soil to see if the earth is ready for their presence. The following track, “Familiar Places”, introduces a minimal shaker-beat and rhythmic, bouncy guitar that eventually presents Ward’s beautifully rich voice. Lindsey has a voice entirely of her own; each vowel swells and implodes into elegant vibrato that trails after her phrases with poise and delicacy. As a vocalist, Lindsey Ward exhibits incredible control over her voice that can only implicate her serious studies as a songwriter, she is a musician that knows her voice very well and challenges her boundaries. On “Learn to Love”, her voice soars and dances with her violin, creating a duet of high frequency notes that border a near impossible range that would leave a young Mariah Carey envious. Though it’s evident Ward is an incredibly well-versed violinist and could effortlessly clutter each song with impressive complexity, on “Learn to Love” she allows the violin to ascend into the air with smooth, cinematic lucidity that could bring a brutish MMA fighter to emotive oblivion. It’s in this moment where we see Lindsey’s voice and instruments come full circle. While their individual parts are unique, colorful strokes serving their purpose, they unite as one with Lindsey’s voice, matching her elegance, curiosity and emotional intrigue. On “Strange Addictions”, we are presented a different angle of Ward’s songwriting; a playful song made up of whisper-like chants skillfully providing the song’s subtle rhythm as Lindsey amuses an improvisational jazz melody. Lyrically, Ward is not afraid to ask the difficult questions, and she’s not deterred if she doesn’t have the answers. For Lindsey, the world is consistently inconsistent, “positive or negative/ we are all the same/ time is the only constant/ though it’s ever changing” and the only way to wake up with a freshness to the day is to open yourself up to the world around you; take in the light, expect the change, absorb sounds, and understand there are bad habits parallel to the good.

Though In Bloom is a short debut EP, it is compact with the maturity, ideas and narratives that surpass many songwriters third or fourth albums. She is without doubt a promising songwriter both in her comprehension of music, and her natural ability to approach songwriting with the intent to revitalize its potential emotional weight. I speak for all of her fans when I say we certainly anticipate her next release, as we know, somehow Lindsey will top herself, therefore topping all of our expectations.