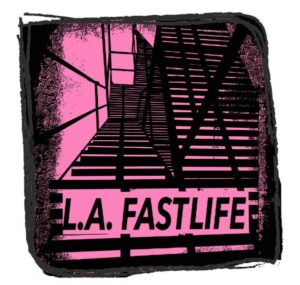 L.A. Fastlife traverses the garage, proto-punk, and rock superhighway both at a most intense rate of speed and at times lumbering, their vehicle shedding dirt and ice like an east coast punk comet.  The first track “Trends” crawls along through the sludge of this home-made recording, the quality of which is reminiscent of some early “Guided By Voices” tracks.

Full idiosyncrasies on display, “Killbot” picks up the pace, full of squealing guitar and angsty, blown out vocals, covering garage rock territory like The Sonics up to late 70s and early 80s punk like Black Flag, Wipers.

The next few tracks move from sludgy to almost street punk, maintaining an intimacy partially due to the raw recording and intensity of the performance that was captured, leaving you a few moments of calm here and there, but overall for the duration of the EP, hitting you with chunk of raw east coast crust.  Despite this, they still manage to fit in catchy moments and very short-lived sweet melodies, soon to be crushed by feedback and fuzzed out guitars.  Again, I find myself feeling like I’m watching this band in a basement, the smell of damp beer and the movement of bodies as waves of fiery sonic attacks fill the room.

The EP wraps up with its most heavy and blown out track, “Pin”.  A self-destructive  track that leaves no survivors; the kind of song a band plays last because they can’t physically do anything after it, but as a listener you’re left wanting more.