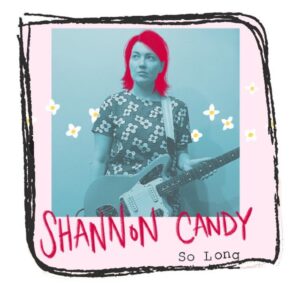 This is an 18 minute rock n roll party that also serves a nice bog off to misogyny in the DIY world. On the track, “Well Actually,” Shannon Candy sings “they’re just gatekeeping the scene, and I can tell that you’re a problem if you think this song is mean.” This song expresses the crumby ways that men have dominated DIY spaces. Women and non-binary folks can move their own equipment, play drums, write songs, and run a sound system, without help from men. On “Snaps and Claps,” Shannon Candy facetiously asks “It’s like the way things are going, men don’t even want to say ‘hi’ to a women, don’t you want men to talk to you?”

If you’re looking for an album that feels like a DIY or dive bar show in Chicago that is filled with catchy melodies, distorted guitars, and sharp lyrics, listen to this on repeat. This is Shannon’s first solo album, but for more of Shannon’s music, checkout Strawberry Jacuzzi