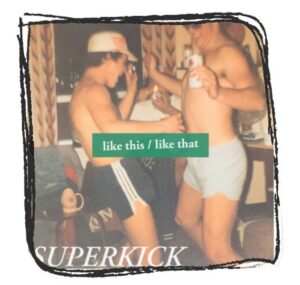 Superkick’s sophomore record Like This/Like That triggers the nostalgia of a band you wish you discovered in your final years of high school. While the band executes a level of sonic maturity that graduates from pop-punk adolescence, they still embrace the frank angst of late 90’s and early 2000’s rock that charmed youthful spirits. The result is an energetic rock album that highlights the qualms of a young adult carving their way through existence.

LT/LT opens with “Project 21”, a warm introduction to the band’s overall most-studied sound. Assertive guitar and lively drums frame the song, rolling out the carpet for the band’s lead vocalist Joey Mirabelli. The charisma of Mirabelli’s quirky shrieks pierce the mold of Superkick’s established sound. While Mirabelli’s voice aids the group’s individuality, Mike Vaughn accentuates the lead vocals with a delicate but present vocal contribution, giving choruses just the right amount of force to really feel the power of the sentiment. Impressively, the three-piece band manages to create a full, dynamic sound with a minimal setup. Throughout the record, the band explores explosive Noise-Rock chaos, while still maintaining a focus on their carefully calculated, pleasant melodies. These attractive melodies offer a pop sensibility for the band, making them an approachable listen to those that are not acquainted with the band’s scope of influences.

The track “Sure Thing” exemplifies this prospective reach. “Sure Thing” is the engaging intermission that breaks up the album’s vigor and showcases the band’s songwriting chops. The song itself is a beautiful, toned down acoustic track, featuring the crisp, enchanting voice of Laura Jean Anderson. Anderson’s poised vocal delivery perfectly accompanies Joey’s wholesome tone, neither overshadowing the other. Sure Thing was the last of three singles released prior to Like This/Like That, a bold but refreshing curveball to the bands previous catalogue. The song was paired with a music video filmed by Superkick, following a wandering, scootering ghost around city streets and apartments attempting to get noticed. The music video is a charming, endearing DIY effort harnessing the feelings of longing to be wanted.

Superkick’s Like This/Like That is a zesty compilation of songs, seemingly suited for an impetuous summer drive with the boys. Moreover, the band guilefully slips into the inventive curiosity of melodic but strident Indie Rock liken to Car Seat Headrest, Japandroids and Bully.