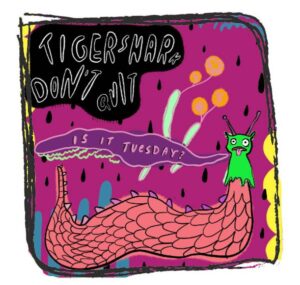 This latest release from Tigershark Don’t Quit does what few could or would even want to, which is to capture The Year of Our Torment 2020 as it appeared in the psyche. Starting and ending on the motif of fire was a deft move as it captures something about the time in which it was created: full of destruction, burning hot, but yet offering a sense of clarity and the possible in the end sifting through the rubble. The songs here go quick, as is the trademark of the group, but pack a lot in the time they do utilize. With each track standing for one month of the year, it’s both a document of the time and an interpretation of what each segment might mean in the broader context. I still don’t know if I can answer the question “Is it Tuesday?”, but I do know that I like this record and hope you will as well.

(Editor’s Note – The editor is in this band)