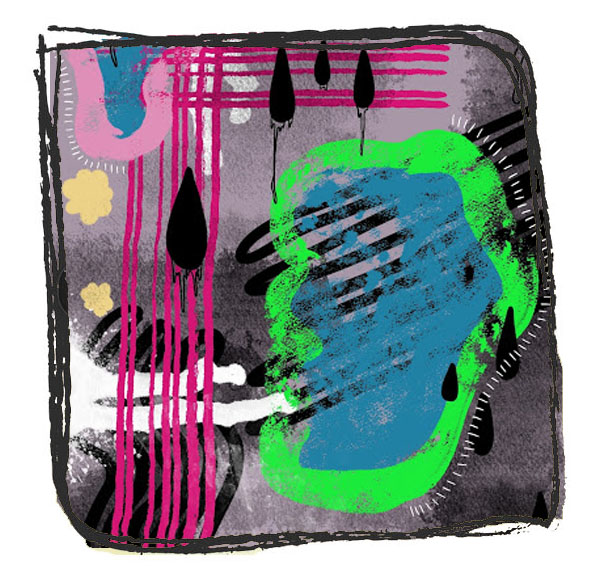 Review and Art by: Maggie Denman

One of my first instincts when I listen to a band is to picture what music the members are influenced by. What jams they play in the morning before work. The chorus lines that get stuck in their heads for days, weeks, and months. When I listened to The Cell Phones newest album Battery Lower, I knew I was in for a musical treat. Not just because I’ve had the pleasure of seeing this band live a few years back with another Chicago band WAD at The Empty Bottle (Oh remember the before times?) but because I knew their favorite artists were similar to mine. That if I looked in each of their record collections, I would not be surprised by what I found. Let’s say this, if you’re looking for a band that sounds like if Save Ferris was a three piece mathy hardcore band that loves Sonic Youth. Still doesn’t make sense? How about if Head Wound City mixed with A Giant Dog with classic hardcore tendencies.

We won’t get too hung up on that, since each track off this album has a different feel that slightly deviates from that. They have titles like Untitled 3 (ODe to Eddie Brock) that are straight punk songs. Fast. Sludgey bass. Emotional scratchy vocals. Followed by tracks like Less, that showcases the songwriting and complex influences this band clearly has. A band that favors punk, 80’s pop, and b side bangers from top artists of each decade. Basically, I wouldn’t want to try and cover these songs or even attempt the time signatures, but with a band this riff and beat heavy while also being melodic, political and from the midwest? They’ve made it to the daily rotation.

Top 3 Songs off the album: Less, Untitled 3 (Ode to Eddie Brock), and What you would do.