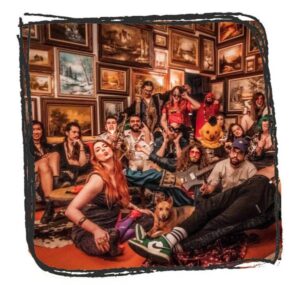 “Just be nice, and make good tunes” was the ending statement in this brief interview via messenger with BrBra Bush. This Chicago funk collective is bursting with creativity, fun(k), and members. The band itself serves as a great starting point for digging into the Chicago music scene, with members of BrBra Bush also being involved with: Watercloset, Manslotter, Diagonal, Melo the Generation Hero, You-Folk, Rookie, The Hemingers, Luca, Beastii, August Hotel, Flugal and Beach Bunny.

BrBra Bush features a core group of “8 musicians, a rotating “choir” of half a dozen, and a gaggle of puppeteers, visual artists and performers chiming in.” Since starting, BrBra Bush has released several singles and short plays, as well as a full length vinyl.

Tim – What is it like to be at a BrBra Bush show?
BB – You know the start of Koyanakwatsi where the workers are toiling in the mud with faces of simultaneous joy and anguish? There’s beauty in the break ground baby. Every brbra gathering has been a little different. You for sure will catch our navigator Ace in his big purple overdrive hat. Ace takes a stand at a specific point in the venue that we seek out prior to the show. During his song he’ll engage the quantum overdrive and allow everyone to experience the show excelsior. Its something you have to witness first hand to see see. Sure, there’s puppets, incense toting cantors and a few grown men sobbing in the corners of the room, but the real encounter is the music itself. Even with multiverse continuum clouding the sonic division, the funk slices through the universal core and brings down the ONE like a thunderjolt of trooth. You can’t deny it, can try to ignore it. Be like ignoring a holy 2×4 to the forehead. You gunna get godsmakd mr powrman. Being at a brbra show is like remembering all the things you know you forgot to do the last time you died. Only its a relief, because we have all the time in the world. Oh and we pass around a seven foot paper machete joint that really smokes. Its pretty sweet.

Tim – What’s in the giant joint ? What can people expect in the future from BrBra Bush?
BB – Oh we aint done by damn sight: We finished a third album right when the panny pan pan hit back in Feb 2020. Been sitting on it for over a year now, just don’t feel it’s the right time to set it free. The new Brbra album working titled: “AOL 4.0” is a doublemaybetriple LP with about 50ish songs ready to go. Were assembling artwork and getting ready to press to vinyl with Smashed Plastic, where a few of us work. In 2020 we wrote the theme song for our good friend Robyn’s psychic/intuition geared podcast, “Seeking with Robyn” Well worth a listen if you’re interested in intuitive living, or talking to ur dead mommom and poppop. (I know we are!!) Otherwise its been sideproject city. Les see… Two of the brbra members Ash and Jojo started a thrashy/sludge ovary-crushing peg ur husband for his birthday band called “Manslotter.” Thats been a hoot to watch blossom into a full fledged hellflower. We composed (oooh were compooosers now, how posh) a film score for an awesome short by our friend and local film maker Kuba. Thats slated to come out in the next few months. But the real toad in the hole we’ve been working on this whole time, (and gollygeedamn are we excited about it) is our children’s video series: “Father Chicken.” Weve spent most of the panhandle collaborating with puppetmakers, animators, chicken wranglers. Its going to be a party and you’re all invited. Imagine if Holy Mountain and Sesame Street got Bob Ross knocked up in stop motion. Its also in Spanish. Padre Pollo is coming to town this fall. Heads up. We do have one show on the books. Brbra Bush is opening for our galpals “Rookie” at the Empty Bottle on Nov. 27. Our first show in a year and some change. Oh the big joint is full of dryer sheets. We used to use it in my Memaws basement before devil lettuce got legalized. Ritenow, its leaning behind my dryer.
I have yet to experience the bizarre joy of seeing BrBra Bush, but if you’re around Chicago on Novemeber 27, Empty Bottle is the spot to be. Listen for their new tunes that will be out vibrating soon.
-Tim Bauer