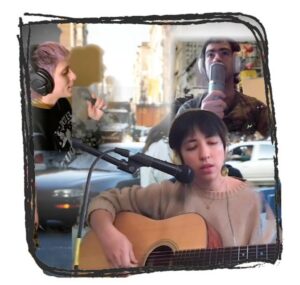 The Union of Musicians and Allied Workers (UMAW) Chicago chapter hosted a house show for our times. Rather than packing into a friend of a friend’s dim basement, attendees tuned into the mutual aid medley from their own homes. Guided by Ewe-Ma (a phonetic play on the union’s acronym) the helpful sheep, viewers grazed a sampler of Chicago’s DIY scene. All sets were pre-recorded and masterfully mashed together. “We just did old school MTV!” enthused UMAW member, Daymaker guitarist, and graphic designer Egon Schiele.

Fran opened the show with a raw, solemn Portishead cover.  The second and final song of the set was a new original entitled “So Long.” Gentle rainbows striped the wall and tickled the houseplant behind Fran. Lyrics such as “I can’t hold on with a rope so long” reminded viewers of their own tethered, tenuous intimacy to the performers.

Tenci’s split set facilitated escapist fantasies via greenscreen. First, we became horses galloping free across plains and beaches, hooves dancing over rippling guitar riffs. Then, we took a time traveling taxi to Avril Lavegine’s 2002 New York City for a stirring cover of “I’m With You.” Kwirabura’s set played like fan fiction of a half-remembered anime or a relationship post-mortem phone call with a good friend. The duo filled their small, string light-festooned studio with wistful, sad tunes for when dreams really do seem impossible. Monoculture’s gelatinous bossanova-tinged tracks transported listeners to more tropical climes, far from the Chicago winter sun. Next, Friko’s dreamy living room set streamed from an endless evening, maybe past, maybe future. “In Out” embodied a zen take on quarantine blursdays in lyrics “I can hear a symphony moving in and out of me.”

Ariel Zetina sedated and elevated the evening from a virtual field of poppies. Manic and menacing, pixie-like renderings brandished sword-sharp umbrellas as they zoomed to Ariel’s trance beats.

Between each set, representatives from Brave Space Alliance, Our Music, My Body, Artist Resource Community, Chicago Community Bond Fund, and Chicago Alliance Against Racist and Political Oppresion delivered passionate pitches for each of their organizations. Short musical and visual arts interludes enticed viewers to partake in a raffle. Priced at $10 a ticket, the benefit fundraised for the DIY CHI Mutual Aid Fund. Established in the wake of pandemic-related venue shutdowns, DIY CHI Mutual Aid offers grants for local artists in need.

Though the fundraiser lacked the spontaneous electricity of a live show, the sense of community was strong.

After the show, co-founder of DIY CHI Mutual Aid and organizer of the benefit Zoey Victoria reflected “I’m feeling inspired for the future. It’s amazing what we can all do together.”

Miss the show? You can still support these amazing causes and artists!

Full disclosure, Vero Rose Smith is a UMAW member but did was not an organizer of this event.